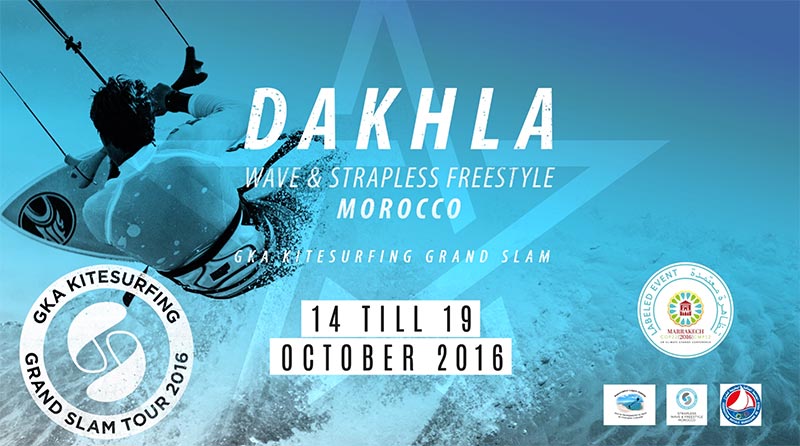 And so draws to a close the 2016 GKA Wave and Strapless Freestyle Tour after a long day of back-to-back heats that whittled down the competitive field to just two riders, Keahi De Aboitiz (AUS) and Airton Cozzolino (ITA).

Although there were a number of riders who could have held their own in the final, it was equally no real surprise that these two found themselves battling it out for the top spot. A real clash of the titans. 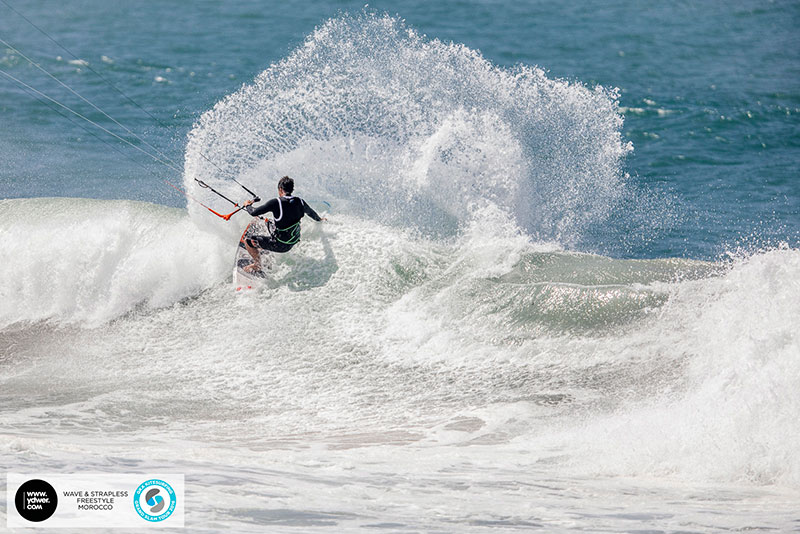 The waves had been steadily improving as the tide dropped and as Keahi and Airton took to the water they ramped the level up, giving us one last 15 minutes of flair with the size-able sets coming through. Going wave for wave for the entire heat, they put on a show of astounding ability and vastly different styles. 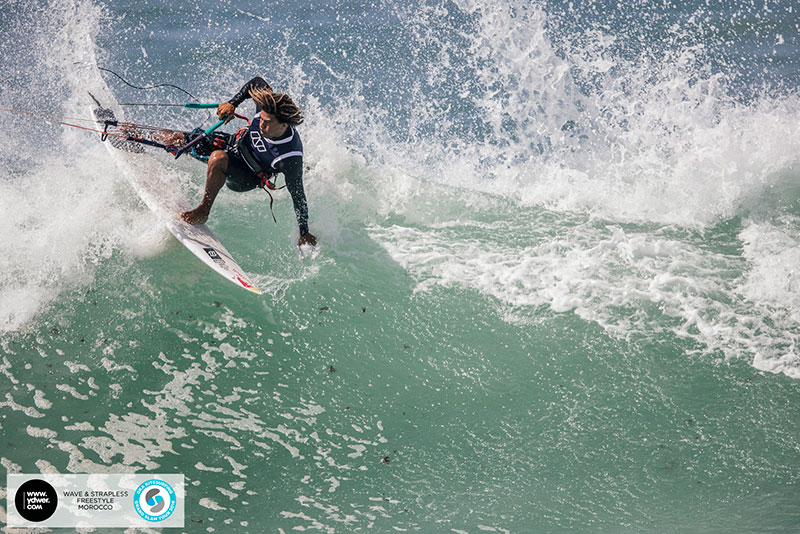 Airton was all commitment and power, driving hard through bottom turns and attacking the lip with a vengeance while Keahi calmly sought out the best waves he could before carving them to pieces in his smooth, unfaultering style. At the end of the heat, to the onlooker, it was impossible to guess who’d come out on top and the reaction in the judges’ tower reflected that with a very small margin between the two riders’ score sheets.

After a tense wait as the judges totalled up the scores, Keahi was crowned the winner and, in doing so, he increased his run of undefeated events here in Dakhla to four. In the losers’ final we saw Paulino Pereira (POR) triumph over Jan Marcos Riveras and also take third place in the overall rankings ahead of the Domincan rider who now lives in Tarifa. 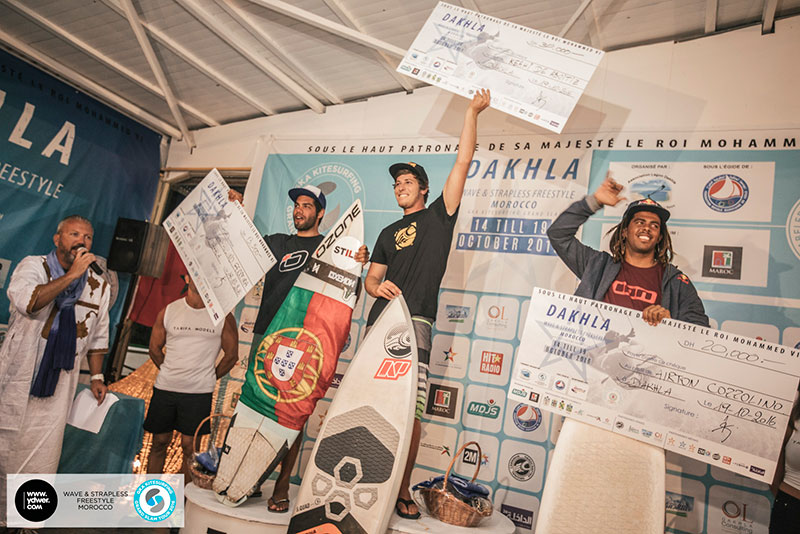 Keahi on top in Morocco, Airton finished second with Paulino Perreira maintaining his record of achieving a podium spot at every event this year
Photo: Ydwer van der Heide

However, the final drama came as we waited to hear who would be crowned the GKA Wave & Strapless Freestyle Rider of the Year. Such was the close run points race for the title, when Matchu Lopes (CV) was announced as the champion, after being dramatically eliminated by Keahi in the quarter finals, the beach went wild with Matchu himself lost for words before being hoisted on the shoulders of his fellow competitors and draped in the Cape Verdean flag. 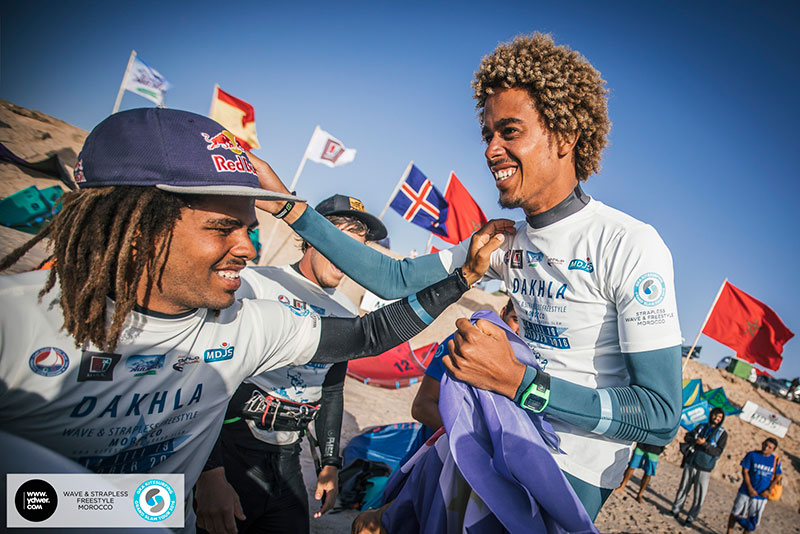 Matchu’s victory came at the end of a marathon day of heats here in Dakhla and, while we had a consistent 15-20 knots throughout, the swell was challenging at times with some heats benefitting from better waves than others. 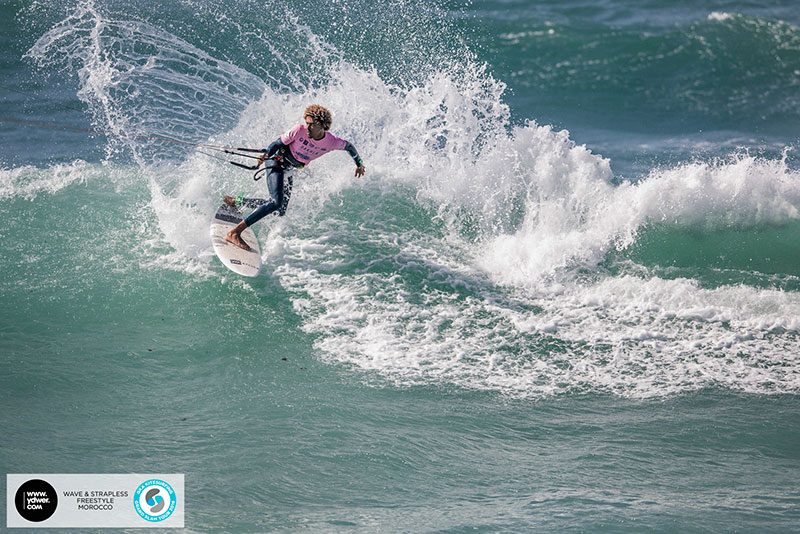 The field was stacked with riders capable of taking an event win and there were a number of standout performances in the later stages of the competition. Filippe Ferreira (BRA) was going for broke today, tearing apart even the smallest of waves with his relentlessly aggressive style and fellow F-One rider Mitu Monteiro (CV), a true legend of strapless wave riding and freestyle, was breathtaking, riding waves right into the beach and doing silky smooth wave 360s perilously close to the rocks – always effortlessly kicking out just in time. 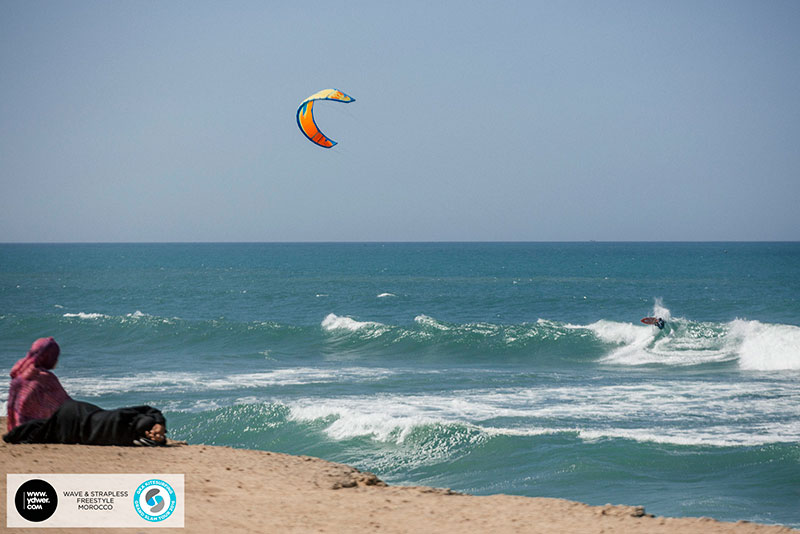 Paulino Pereira had a slow start in his first heat but put it all together later on in the day, living up to his moniker the ‘Portuguese Powerhouse’. Another rider who could have been expected to stick in right until the end, and did, was Jan Marcos Riveras (DR) who rode hard and recovered well from a nasty looking crash on the rocks in the quarter finals to go on and win his heat. 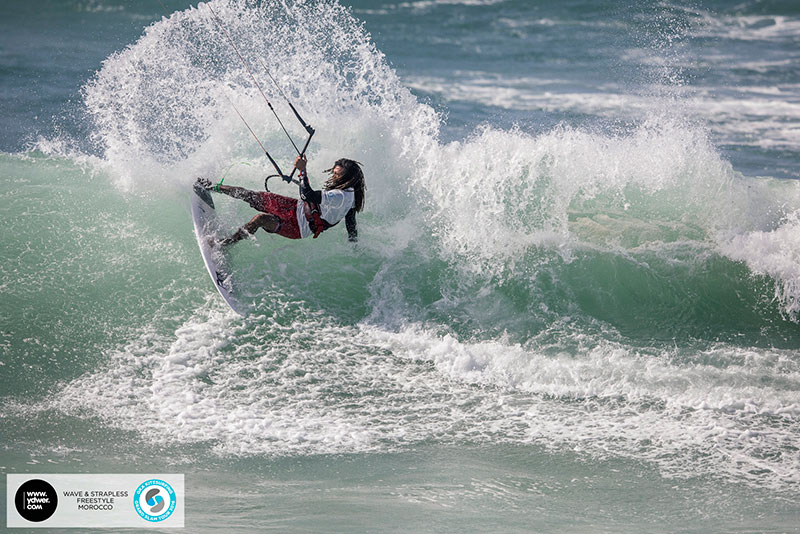 The younger riders in the competition were out to make their mark today and we saw James Carew (AUS) come within 0.2 points of event winner Keahi at the end of round three, while Nicola Abadjiev (BUL) pushed Paulino Perreira all the way during their heat. Pedro Matos (BRA) was clearly far more comfortable in these prevailing cross shore conditions than the more offshore conditions of previous days and showed real potential in his final heat against Mitu Monteiro. 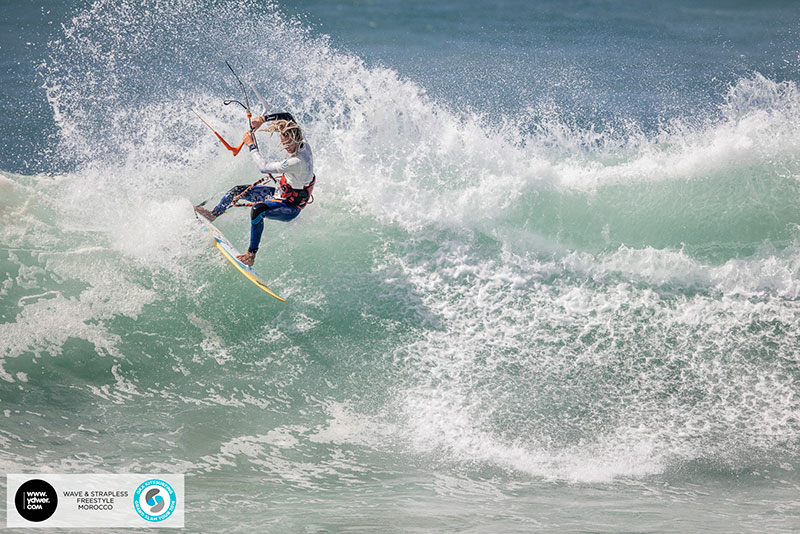 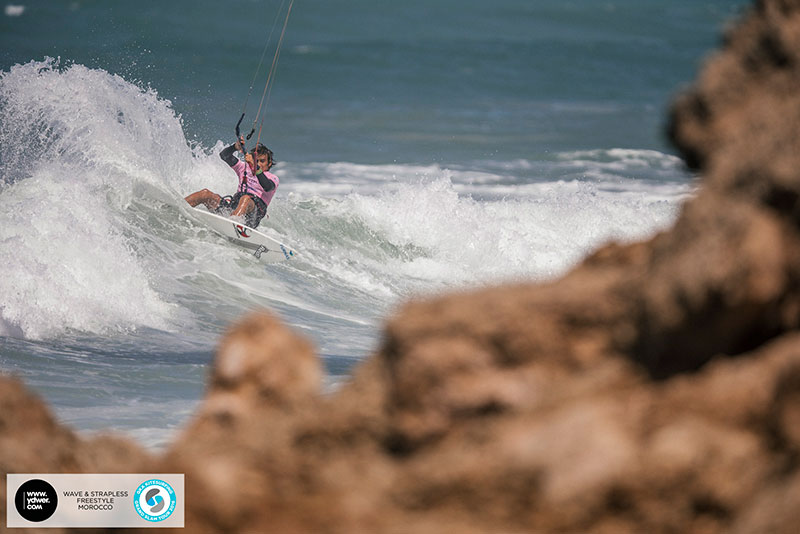 The four women in their division competed in one mega heat late in the day when the wind was at its strongest and Milla Ferreira (BRA) took the top honours, continuing on the impressive form she displayed in Mauritius, while Kirsty Jones (UK), a rider with a great deal of competitive experience, finished in second followed by Tarifa’s Carla Oria Herreira (Spain) in third. 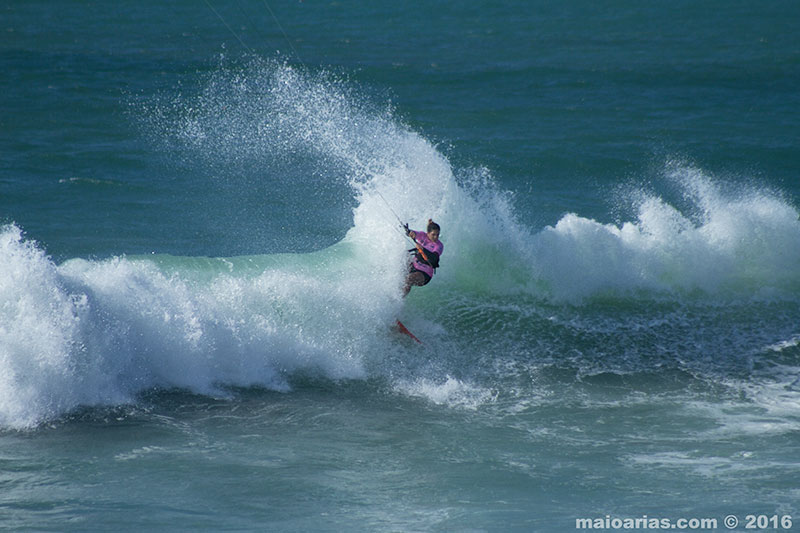 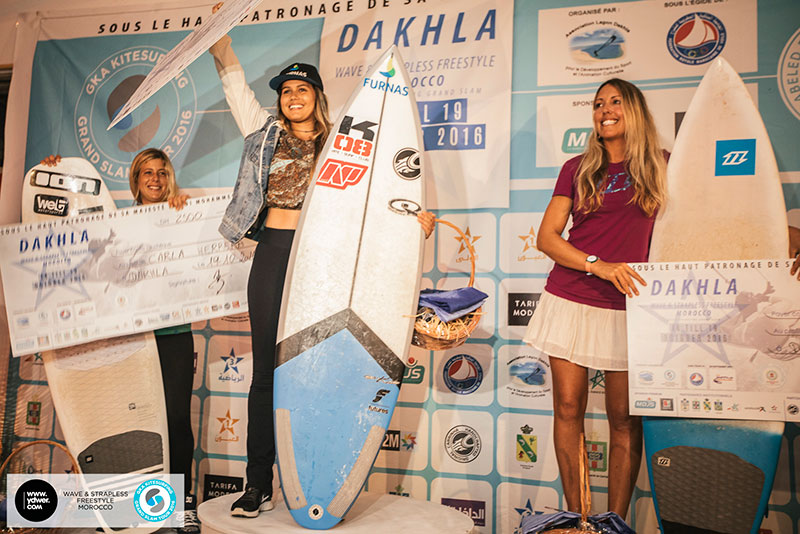 We have reams of images and video to run through over the coming days after a truly classic climax, so stay tuned to the GKA social media channels for more.

Year one of the GKA Wave & Strapless Freestyle Grand Slam Tour is a wrap. 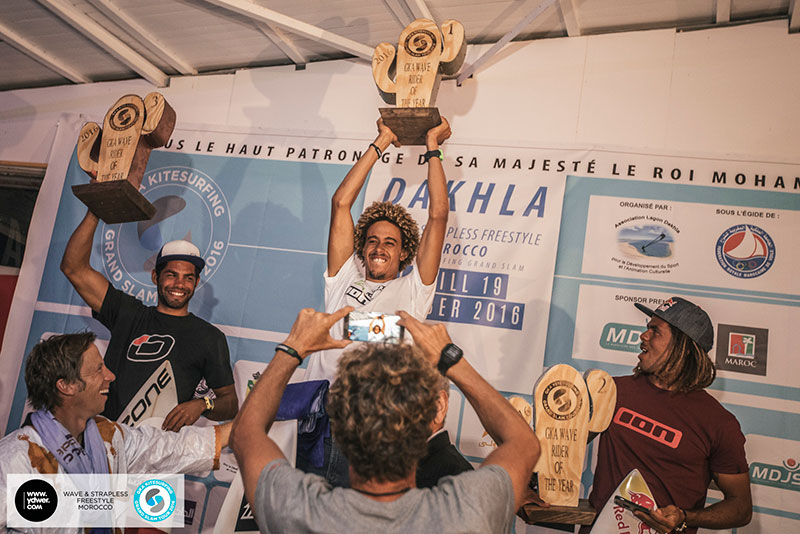