The brother and sister kitesurf champions Filippe et Milla Ferreira landed for the first time on North Shore Oahu in Hawaii. They have been training in the archipelago for the KSP, due to take place in Portugal in June and they showed much affinity with surfing. 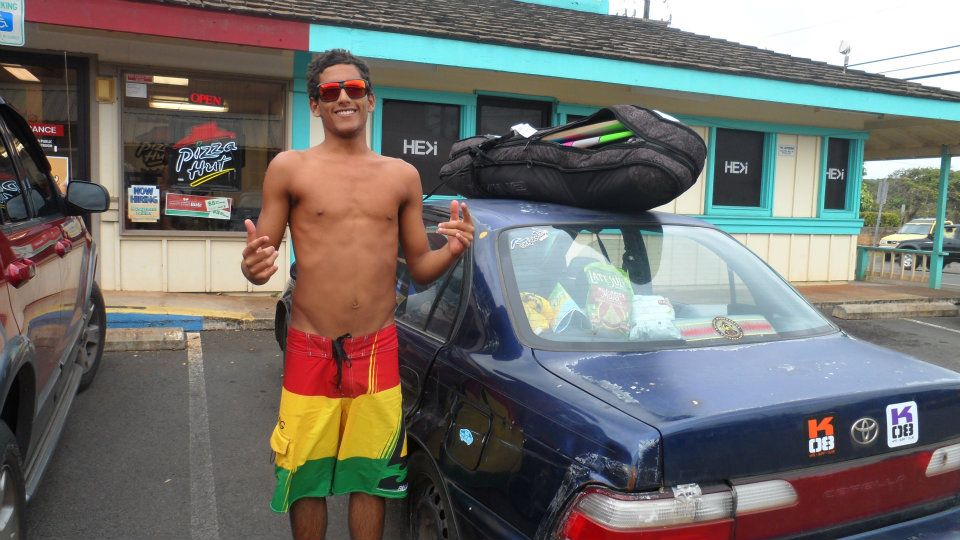 In the interview below, both talk straight from Hawaii about their expectations for KSP World tour and the feeling of their progress in Hawaii.

What is the reason for this trip to Hawaii and what did you find along this experience ?

Filippe’s aim is to train front side riding for the KSPWT. Apart from getting to know Hawaii and testing gear, it is an enriching experience . I  get to meet new people and I can ride in bigger and more powerful conditions. When I’ll fly back home I think I’ll feel more confortable at sea.

Milla came to Hawaii to compete for the last leg at Ho’okipa in December. And of course for surfing paradise. Hawaii is always a surprise. I love this island, where we have wind and and waves all the time, that keep us on the water every day. 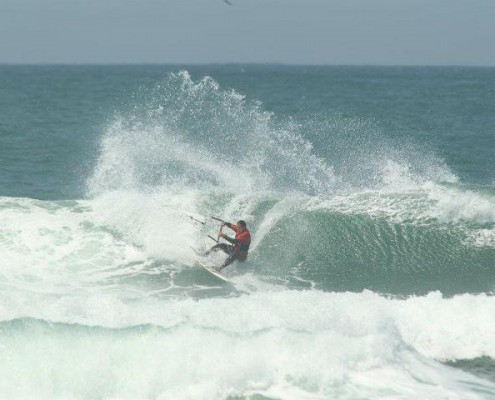 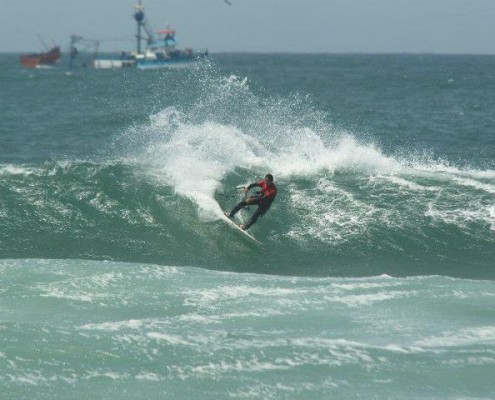 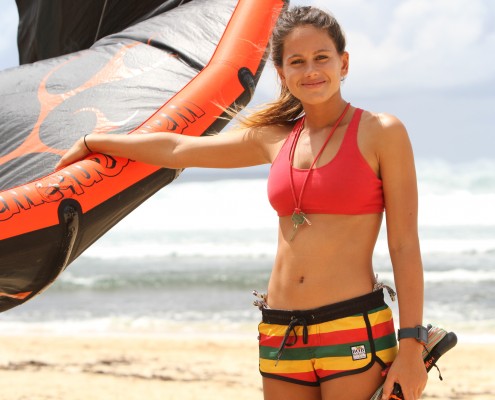 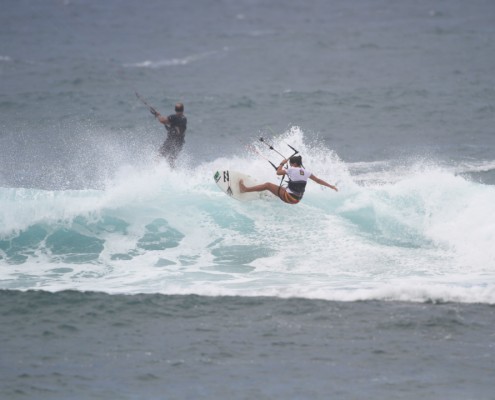 How did you get to know kitesurf and what dou you both enjoy the most doing it ?

Filippe : I owe it to my father. He came back from Hawaii, bringing a kite and we learn to fly it until he opened a school in Barra da Tijuca (k08). I love it because it is a good practice to improve my surfing.

Milla : in 1998, my father (Sylvester Ferreira) came here for his first season in Hawaii, looking for perfect waves like many surfers do. Then he discovered kiting and thought to take it back to Brasil without any hesitation.

When he came with a pipe, my brother and I were very eager to test the new toy. I learned in the pools made up by heavy swell in the sand. That enabled me to ride all kind of waves. Since then, I rush on every wave I meet, even if it leads to the end of Barra da Tijuca (she laughs…)

What do you prefer : surf or kite ?

Filippe : I love what I do for a professional reason: Kitewave, but it has nothing to do with surfing and I like catching some surf tubes. There is nothing better than that and I want to keep surfing all my life.

Milla :  It depends on the days. If the sea surface is perfect without wind, I will surf. If the wind is blowing, it will be kiting. It is very good, because I never get bored home, when there is some wind.

What is the interaction between both activities?

Filippe : a surfer can learn to ride with a kite, the board control is already acquired and kiting in the waves brings a lot  to the surfer.

Milla : He who already surfs, when learning kiting, is halfway in his progress, because he already has a good basis. A kiter will learn surfing along his sessions by acquiring more expressive and powerful tricks. 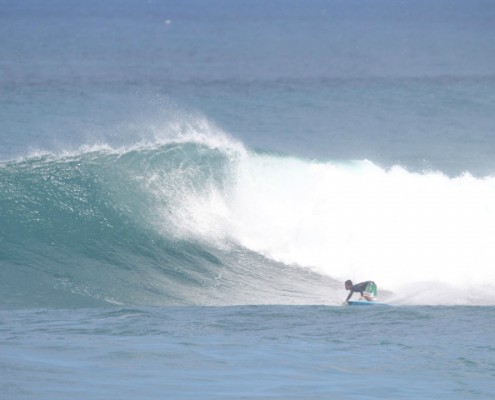 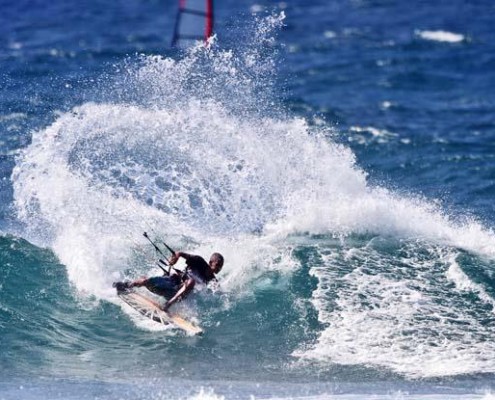 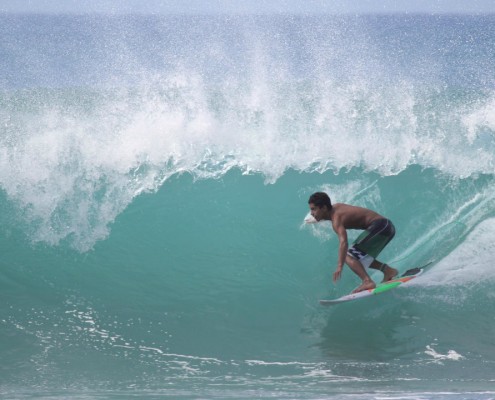 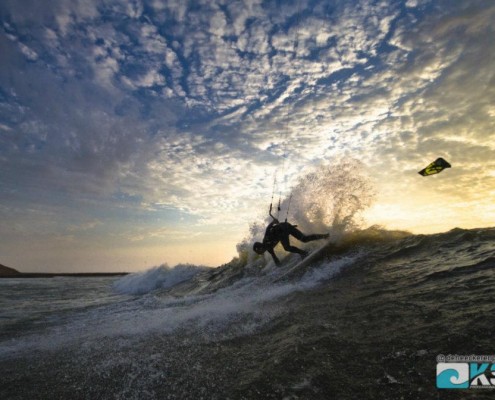 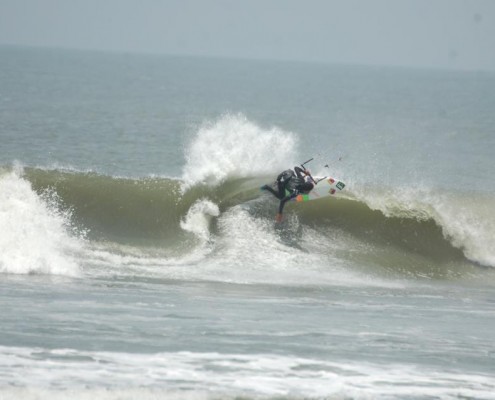 How did you get to qualify for the World tour and what are your expectations ?

Filippe : It came through the Brasilian Kite association. I won 2 of the 3 legs in 2011 Ceará et Florianópolis (SC). My third place at the KSP stage in Peru was a good opportunity, too.

Milla : I won Pacasmayo stage in Peru, but I could not take part in the other stages, because I did not have a sponsor. This year, I got a wild card for the whole tour. Since my victory in Peru, I believe I can win the championship and I dedicate my whole life to sports.

(Milla is the female Brasilian champion : twice in Rio, 4 times in Ceará and twice to the Superkite).

I do my best to be on the highest step of the podium this year, I have been training hard, on land and on the water. I really want this title, but I know all the girls want it too. I keep training for a victory.

How does marking work in wavekiting ? Is it different from surfing?

Filippo: It is the same. Criteria are similar. You win points with speed, radical innovation, fluidity among others.

Milla : Rating is the same as in in surfing. The athlete has to try and succeed in doing radical manoeuvres in the critical part of the wave, with spped, trength and fluidity. The less you use the kite, the less you are hindered for radical maneuvers.

Who is your model in both activities ?

Filippe : for surfing Mick Fanning and Mineirinho (Adriano de Souza). I try to get a view at all legs of the World Tour, to be better. For Kiting  Fabio Nunes, de  Florianópolis is very good person.

Milla : My biggest source of inspiration is Bethany Hamilton, for her devotion and performance in the waves. She is far from losing temper and giving up surfing, even though she lost an arm, like many people would do; and Andy Irons is a great inspirer for waves. I remember watching his surfing videos and I just try to do the same (laughs..). For kiting, my brother Frajolinha, as I have often said.

What is your daily life ?

Filippe : I try to spend as much time on the water as possible. I train physically or skate outdoor. And I spent my time at K08, which is the first and one of the best kitesurf schools of Brasil.

Milla : when we get up, we have dinner at K08 and we go to gym. Then we do SUP, surfing or skating; We try to be close to the sea and do sports all the time.

Filippe : I train hard to be a kite world champion. I want to travel for surfing and get experience in the waves. Go to new places and meet new people. Lead my life as I like it : in the water all the time.

Milla : I want to improve everyday and be a world champion.

A message for the Internet audience ?

Filippe : thank you, I hope you appreciate the videos, photos and interviews. Good waves!

Milla : You can follow us live on the KSP site.

Translated from the original article written by Bruno Lemos : http://waves.terra.com.br/surf/noticia/irmandade-no-hawaii/52605

We asked Milla to tell us her thoughts about Strapless riding.

Milla, you ranked 1st in Pacasmayo, Peru last year in the KSP tour, riding strapless. What does strapless kitesurfing represent to you?

I started sailing when he was 10 years old, I always had in mind that kitesurfing is a sport of show! That takes the show to the public! When they said that they would take the straps my only main worry was, “How will the show be?”, It seemed that everything would be without the straps calmer, maneuvers without expressions, would not have those aérios. Today I see sailing as an evolution strapless, athletes has evolved every day, trying to radicalize at all! We still have a lot to evolve, sailing strapless will never be equal to the handle. But I believe that we will get closer.

You are back from Oahu, Hawaii one of the best strapless kitesurfing spot. Did you train with local strapless rippers ?

Hawaii was very good for my evolution in the sport, I sailed with all local. Felix Pivec and Top Hat were always in the water, even before the  wind enter they had already arrived at the beach.

Would you compete in the KSP if the rules change and straps are not allowed in that tour ?

Of course, if the athletes who compete strapless are best judged, makes no difference to me, to prohibit the straps. I will always look for progress the way they think is best .

Do we have to separate strapless kitesurfing from riding with straps in competitions ?

I think it would be a nice now, even more than at the beginning of this “strapless” era. Until all adapt better.

To illustrate this trip in Oahu, here’s a video showing Milla and Filippe’s skills, ripping on the North shore.