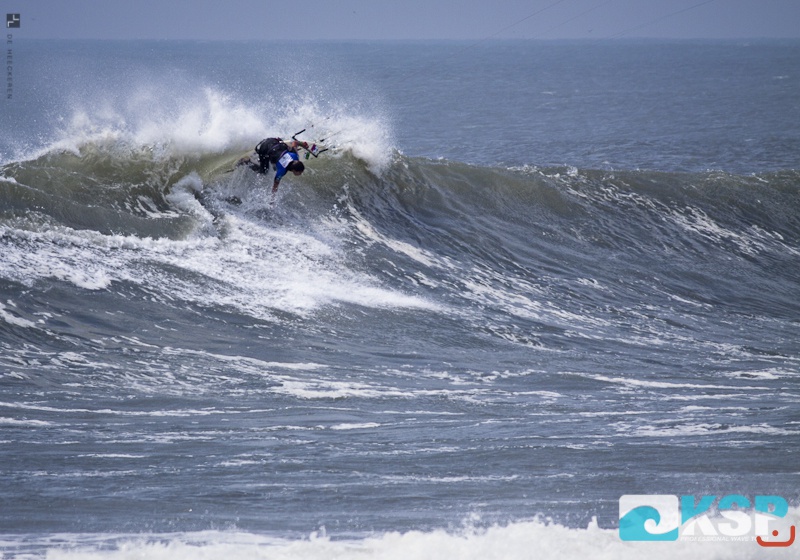 Pacasmayo’s wave allows heaps of switch radical snaps, that you can check out in the nice inside sesh views from jetski after the  summary of the day 6.

Pacasmayo, Peru — October 24, 2011: Amidst another day of prime wind and waves in Northern Peru, contest directors made excellent use of the epic conditions at the main staging area at El Faro (the lighthouse), completing 18 heats, making it all the way up to the Quarter Finals. As head-high sets wrapped around the point all day, once again, riders predominantly kite surfed unstrapped.

In 15- to 20-knots, Women’s Round 2 and Men’s Round 3 started the day off with a bang. Early on, Patri McLaughlin’s (HI/North) surf-influenced spectacle of a performance stood out, which looked almost identical to his epic mile-long morning surf sessions. Scoring an 8.57 on one wave (third highest single wave score of the day), McLaughlin earned a 16.06 total heat score — the highest of the whole contest so far.

Two other top demonstrations of surfmanship today came from Felippe Ferreira (BRA), who beat out Mauricio Pedreira (BRA) in Heat 21 by a narrow margin of .67 points, and Guilly Brandao (BRA) who bested Sebastian Ribeiro (BRA) by .67 points as well. The top three single wave scores of the day go to Ferreira (9), Ribeiro (9) and McLaughlin (8.57). McLaughlin’s winning streak unfortunately came to an end when he came up against teammate Sky Solbach (USA/North) in Round 5.

On the women’s side, the three highest single wave scores — 7.5, 7.27 and 6.67 — all belong to one woman, Milla Knesse Ferreira (BRA), whose father is a former pro surfer. The 20-year old who won the Brazilian Kite Tour championship this year (in the discipline of kite surfing), began competitive surfing at the age of six and took up kiting at the tender age of 10.

With her vertical snaps tight in the pocket and impressive rail-to-rail top-to-bottom riding, Knesse Ferreira also earned the two best heat scores of the day — 13.44 and 13.17. As mentioned above, her brother Felippe turned a lot of heads too. With a 12.93, Ines Correia (POR) bagged the third highest women’s heat score.

Overall, day six of second stop of the World Champion Kite Surfing tour saw a number of almost-too-close-to-call heats and loads of incredible action — mostly of the unstrapped and surf-like flavor.

Eight men’s heats remain in the competition, which will kick off the next day of action with two Brazilian Quarter Final showdowns: Ferreira vs. Ribeiro in Heat 29 and Brandao vs. Pedreira in Heat 30. (All four competitors call Pacasmayo a go-to training ground.) Then Etienne Lhote (FRA/F-One) will face Sky Solbach (USA/North) and former Kite Surf World Champion Mitu Monteiro (CBV/F-One) will square off with the rising star Airton Cozzolino (ITA/North). Women’s Semi Finals will start with Kirsty Jones (GBR/North) vs. Milla Knesse Ferreira (BRA), followed by Kelly Strachan (USA) vs. Ines Correia (POR).

If you missed the day’s live-streamed action, it’s all archived heat-by-heat online at www.kspworldtour.com/live. Tomorrow morning at 8:55 a.m. (PET), event directors will assess the day’s outlook and announce the daily schedule, which will both be live-streamed and posted online — with 10 a.m. as the first possible start of the competition.

For today heats coming up in quarter finals of men and semi finals of women!

Stoked On Strapless goes Camper Part I
Scroll to top