Cynthia “Cynbad” Brown and Kunta travelled this summer along the West Coast from Baja to  Northern California to rip strapless some waves in  strong winds. Cynbad tells some words about their trip.

Cynbad suiting up in 6m of Rubber in Northern California.

Can you introduce yourself and Kunta ?

Kunta and I are ex windsurfers, who met while surfing in Cabo San Lucas about 12 years ago. I was a graphic designer, living in Aspen Colorado, and he was a recently retired businessman. We discovered kiting at that time and have created our lives together around the wind and the waves ever since.

Most people travel South into Baja looking for adventure. Since we are ‘ex patriots’ living almost full time in Southern Mexico, we sojourn  North.

Fifteen years ago, I had spent many long weekends windsurfing in Northern Baja, but Kunta had never been. We had put off the trip for  many years, but the news of a close friend getting diagnosed with stage four cancer, caused us to realize our finality, and shell out the cash for a 2012  cabover camper.  A small space, but an absolute must/luxury when the wind is howling and the dust is swirling,  in the remote wilds of Baja. 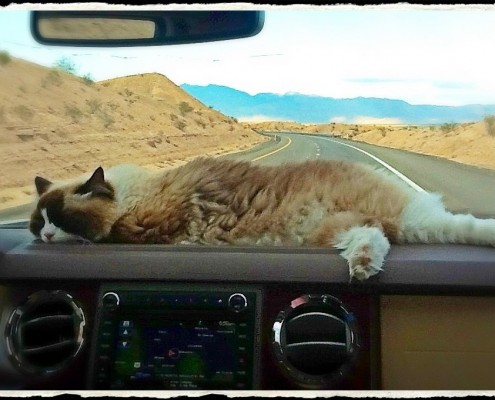 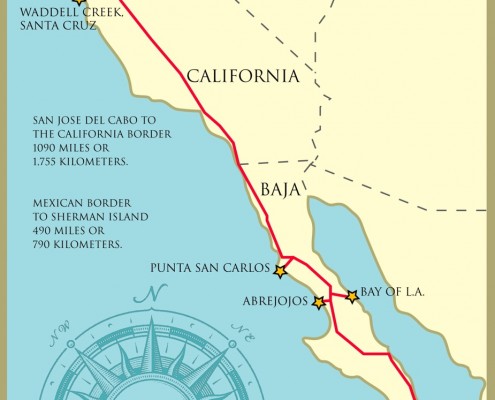 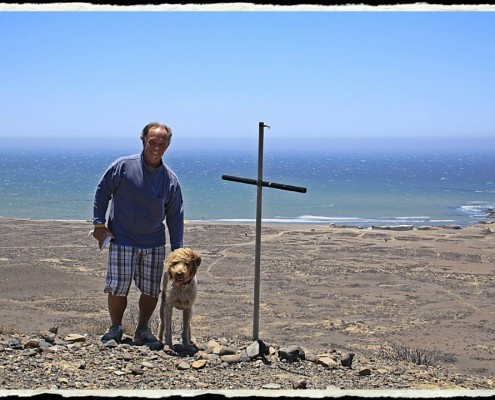 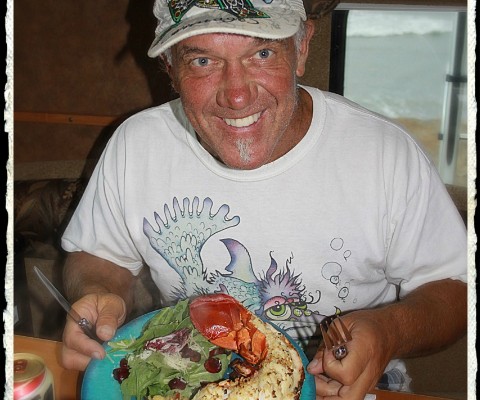 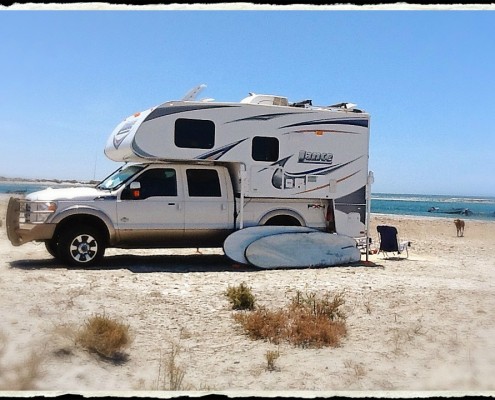 What was your life style during the trip ?

We left the steamy streets of San Jose Del Cabo on the first of June, driving three days North to the 107 degrees of Yuma Arizona. We  picked up the camper, only to turn around and head back to Mexico, 24 hours later. For the five weeks in the Northern Baja we lived in our Lance short bed camper, and realized that we could survive 2 weeks in the total outback comfortably with our solar, propane, and water configuration. However, the greens, beer, and tequila in our diet did suffer.  While in California, we upgraded the space to our 36′, triple slide out, Presidential fifth while. So sweet to stand up and walk around the bedroom!

Into the dust, first part of the trip :

What can you tell us about strapless community and interesting people you met?

There were only a handful of other strapless kiters in Northern Baja. The extreme off shore winds and lack of assistance could be to  blame. There were many days in a row, where it blew so hard, that the windsurfers didn’t even venture out. Any equipment failure would result in an expensive, long, cold  swim while kissing your gear good bye. On the other hand,  the strapless talent in Northern California  is undoubtably the best in the world. The freestyle and wave riding is off the charts. On any given day  you share the breaks with  the greats like Ian Alldredge, Josh Mulcoy, and James Ropner, just to name a few, but the local guys who don’t play the media/self promo game are off the charts talented.  It is a treat to delay suiting up just to watch the the predominantly Caution Kite crew own the NorCal surface and sky with strapless mastery! 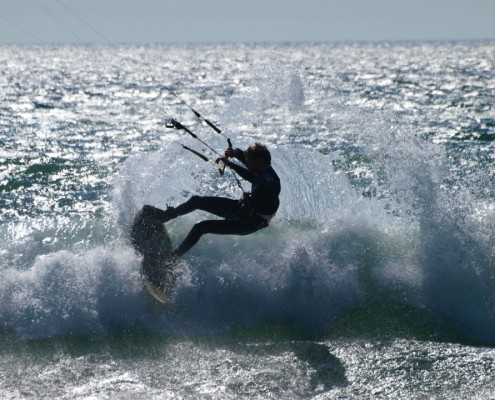 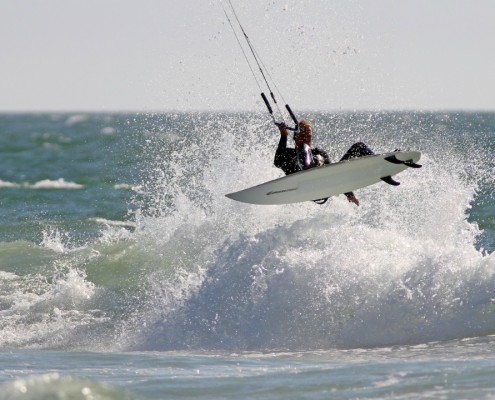 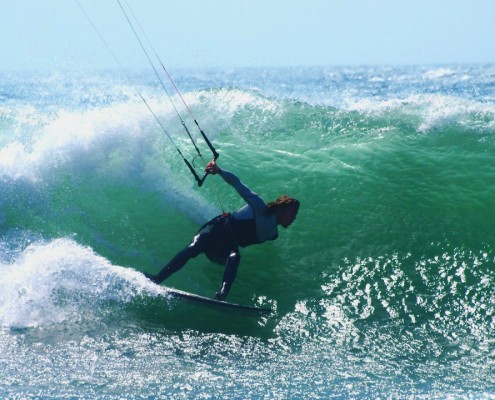 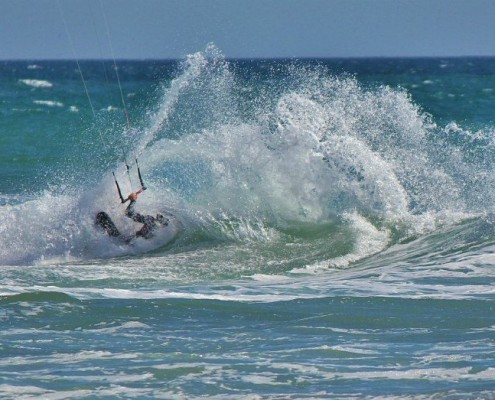 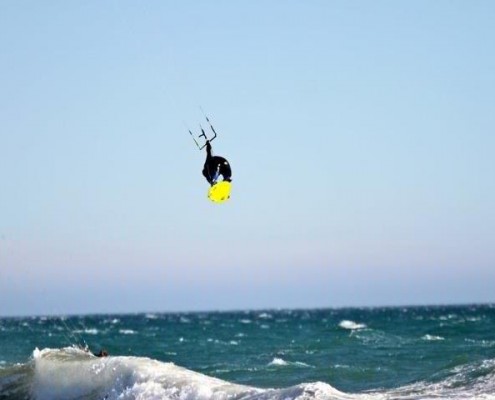 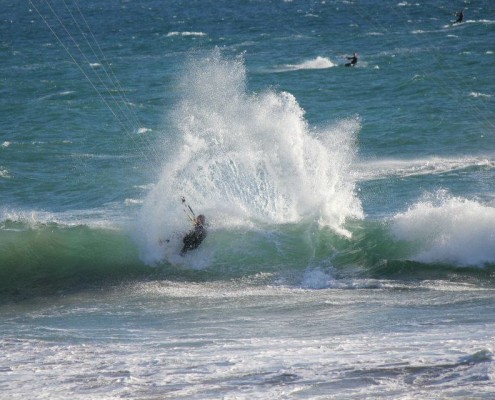 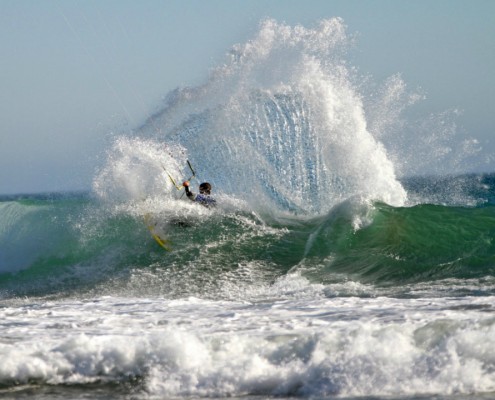 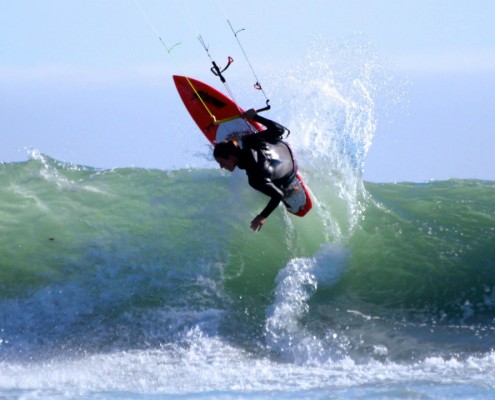 What gear did you use in this trip?

During our trip,  Kunta and I shared a complete quiver of Ozone Reo kites, ranging from 4m to 12m. I used the 4m often, which is extreme since it is basically a meter larger then a trainer kite! We ride FireWire surfboards and have 3 each to choose from depending on the wave/wind conditions. We also travel with skateboards, land boards, a mountain unicycle, and  custom Blair SUP boards for diversion when the wind is napping. 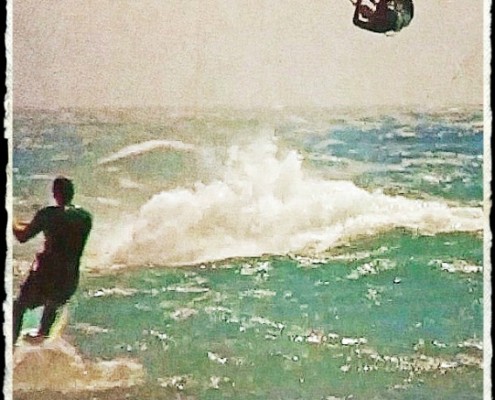 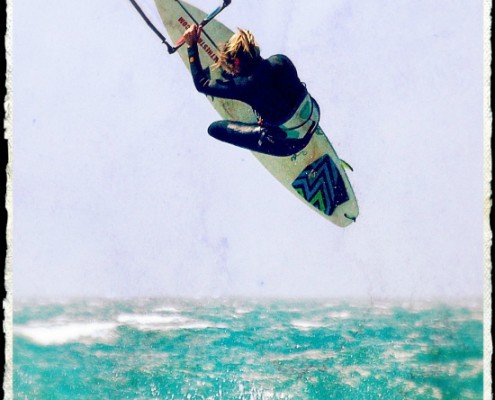 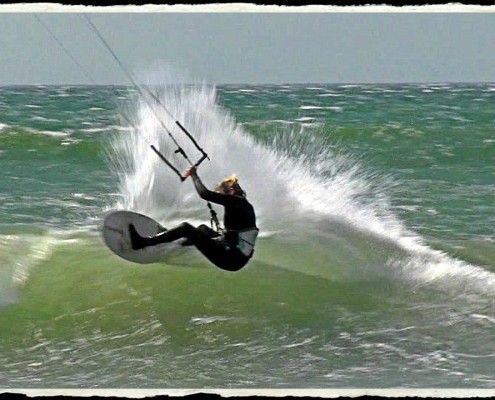 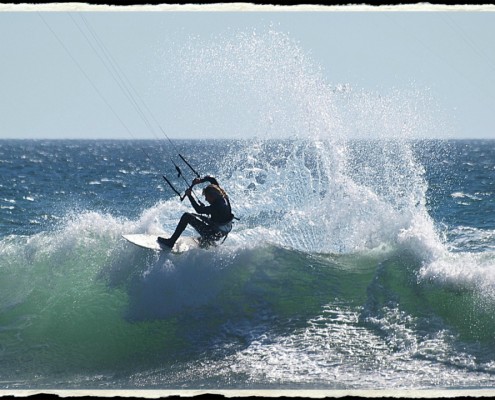 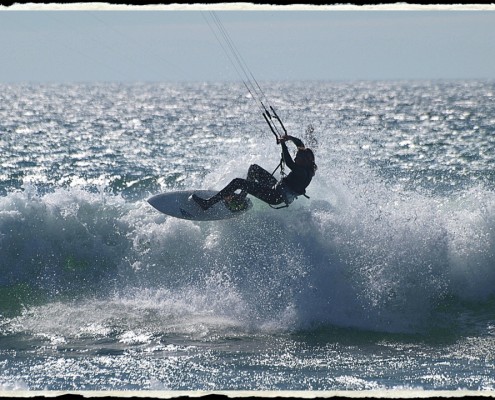 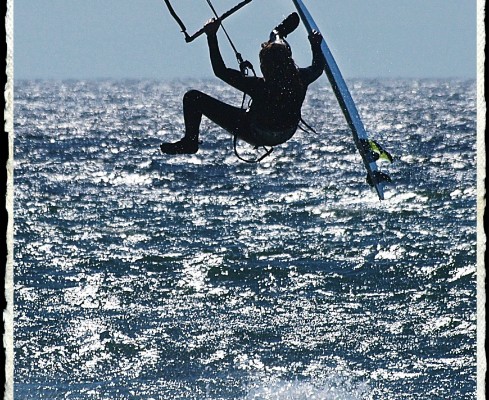 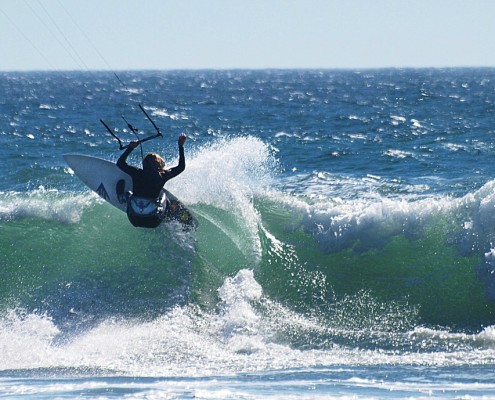 You travelled 1580 miles on the West Coats to rip on both remote and crowded spots. Can you give us some tips to travel in these countries ?

Our children (quadrupeds), Attila and Bizmark are used to living on the beach and on the road.  They were at home in the remote Baja, however we were more cautious then usual as we witnessed hungry coyotes, just yards from our camper on many occasions. The Northern California pet situation was almost more stressful for all, with enforced leash laws and rules, which we are not used to.

Both Northern Baja and Northern California can be either fun or fickle.  South swell, North Swell, light wind, nuking, crowded or mellow, The one constant is respect and proper wave etiquette. These are wave riding destinations, so always give the right of way to anyone riding a wave, no matter who has Starboard. Keep your kite and self out of the way and towards the shore to avoid conflict if you are not riding a wave. If you are new to Strapless kitesurfing and tend to wipe out allot, be respectful, and body drag out of the lineup as quickly as possible. And as with all surfing disciplines, respect the peek and who has the right to the wave, so kick out if it is not you.

What moments will you remain of this trip, best memories ?

We had so many memorable moments during our trip including:  grilling fresh caught  lobster, finding diesel with only miles to spare, trading beer for water, watching the thermometer climb from 68 degrees to 112 degrees in a matter of miles, and the super charged adrenaline rush of wiping out only meters away from a 15′ Great White Shark!

White shark ? Not a fake ? Check it in this video :

How would you place strapless among other kiting disciplines ?

We are so fortunate to be healthy, and alive living in the age of the most incredible sport to date; the phenomena of STRAPLESS  KITESURFING!!!

Thank you Cynbad and Kunta, we are looking forward your new strapless riding tutorials 😉 thanks to the photographers : Tammy Tremaine, Doug Erickson, Zeev Gur, Dave Oates and Gary Strachan.

Cynbad and Kunta are powered by Firewire Kiteboard and Ozone